There are two kind of stages that will more than likely determine the general classification of this year’s Tour de France—hills and time trials. Let’s take a look at hills and what you can do to climb better.

Getting Your Mass Over the Pass
Hills determine the outcome of a road race more than any other course or weather element. Wind is a big challenge also, but a smart rider can hide from it. Corners may also produce the winning break, but, again, smarts combined with handling skills keeps the best riders near the front.

But you can’t fake it on a hill. Either you can climb or you’re dropped. That’s it. Bottom line.

We all weren’t meant to be climbers, however. Some of us are gravitationally challenged – too much mass to get over the pass fast. 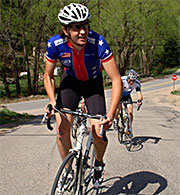 According to the American Heritage Dictionary, “mass is the physical volume or bulk of a solid body.” This bulk is what holds you back when you ride uphill. Historically, the best hill climbers at the highest levels in the sport typically have had a small mass as they were shorter and lighter than the average for the peloton. Comparing height to weight is one way to express mass in a human. This can be done by dividing body weight in pounds by height in inches.

I’ve found that those with a mass of 2.0 pounds per inch of height tend to have the best potential for climbing, but they don’t do well on windy, flat courses or, usually, in flat time trials. For these types of events it is better to be big since gravity plays a small role on a flat course. On the other end of the scale are the high-mass riders with a 2.5-inch weight-to-height ratio or greater. These riders usually are better in the wind, flat courses, time trials, and sprints. They generally avoid hills, and with good reason.

On a very long hill with both climbing at their lactate thresholds, which is common, Rider A steadily pulls away from Rider B since A’s power per pound is greater. Power-to-weight ratio is the major determiner of climbing success. But on a flat course in which gravity is not a significant factor, and the wind is, the advantage will go to Rider B. The major determiner of success in the wind, especially in a time trial, is power-to-frontal area ratio. And since there is only a small difference in frontal area between small and big riders who are both aero, raw power wins – 360 watts beats 300 watts every time.

Reduce Mass?
Obviously, there are two sides to the power-to-mass ratio. It’s been estimated that one kilogram (2.2 pounds) of excess fat on a moderate grade at a fixed cycling effort has a cost of about three seconds in one kilometer. So 11 excess pounds on a 12-kilometer climb theoretically costs three minutes.

Losing that excess mass while keeping power the same changes the numbers favorably when it comes to hills. Of course, mass is best reduced by losing excess weight, not by growing taller. There are downsides to this strategy, however. Trying to shed pounds quickly, especially at this time of the season, is likely to detract from your recovery and capacity for training. You may just start climbing worse as a result.

The best time for getting rid of excess baggage, I believe, is during the winter months. But that’s a whole, ‘nother topic.

Building greater power is also a good idea for those who want to climb better. And, again, winter is the best time to start on this with a structured weight program that evolves into periodized hill training on the bike by late winter and early spring.

Lung Power
What can you do right now to improve your climbing for a season ending race with long hills? Let’s take a look.

There’s more to climbing than just power and mass. You can have the greatest power-to-mass ratio on the planet and not climb for beans if you have horrible aerobic-anaerobic threshold fitness. If your muscles fatigue and your lungs burn when the road turns up for several kilometers, you’ll lose ground on every climb.

One workout to help improve this critical ability right now is “hill cruise intervals.” Find a hill that takes eight to 12 minutes to climb. Look for a four- to six-percent grade (about the same slope as an interstate overpass). Do three to five repeats once or twice weekly on the hill keeping your heart rate at about your lactate threshold or power at functional threshold. Recover after each climb for only as long as it takes to descend. It will take six to eight of these workouts over a four- to six-week period to see measurable improvement.

If you don’t have hills where you live do the same sort of workout into the wind sitting up. It’s not as good as the real thing, but if you live in Kansas that’s the best you can do. 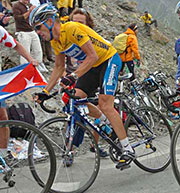 Technique also has a lot to do with how you go up hills. For example, larger-mass riders (2.3 pounds per inch or greater) are generally better off staying seated on long climbs. Envision Miguel Indurain climbing to see what I mean. Most big riders find that staying on the saddle takes less energy than standing. Occasionally standing, however, may be necessary to relieve muscle fatigue or to increase power briefly due to a sudden grade change.

Smaller riders – those 2.0 pounds per inch or less – generally climb better standing. Marco Pantani in his prime was a great example of this.

What Lance did on the climbs in the Tour de France a few years ago is something we can all work on to become better climbers. I often checked his cadence and found it to be in the range of 95 rpm on even the steepest climbs. Raising the cadence takes the load off of the muscles and increases the aerobic-function load. If you have a good aerobic system – as you should if you train properly – higher cadence will make you more efficient.

Also watch this year to see if he keeps his heels slightly raised above the pedals even when seated on a climb as he used to do. This may improve economy – how much oxygen, and, therefore, energy, it takes to pedal the bike. The greatest wasters of energy in the pedal stroke are the transitions from pulling up and back to pushing down and forward at the top, and the reverse of these at the bottom of the stroke. The less energy you waste in these two crucial phases, the more energy you can put into driving the pedal.

Finally, if you want to climb well your attitude must back up your training. Work on what’s going on between your ears every day by reminding yourself, even if you are a “2.5,” how much you love the hills and how much your climbing is improving as a result of all of the effort you’re putting into it. You gotta believe!

Joe Friel, M.S., is the author of the Training Bible book series and many other training and sports nutrition books. He combines the science of training with his 30 years of coaching experience in training athletes of all abilities. He offers training plans for beginners through advanced athletes at www.TrainingPeaks.com.