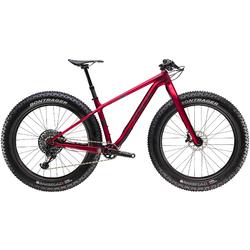 Trek Farley 9.8
$5,149.99
Farley 9.8 is the lightest fat bike we make. It has an OCLV Mountain Carbon frame, a carbon fork, carbon wheels, and a 1x12 SRAM GX Eagle drivetrain with the widest range of gears for varying terrain. This is a mountain bike with no compromises, and it's all about going as fast as possible in every season. It's right for you if... You don't like fat biking - you love it! You make the biggest investment in your fat bike because you have the best time riding it, and you're willing to shell out for the lightest, fastest, fat bike we make because you know there's a return in fun, speed, and adventure. The tech you get A lightweight OCLV Mountain Carbon frame with Stranglehold dropouts, a Bontrager Haru rigid carbon fork, a SRAM GX Eagle 1x12 drivetrain with an extra-wide gear range, and Tubeless Ready carbon Bontrager Wampa wheels paired with 27.5x4.5 Bontrager Barbegazi TLR tires. The final word It's the lightest fat bike we make. A carbon frame, carbon wheels, carbon fork, and top-shelf SRAM drivetrain come together in Farley 9.8 to make a high-performance ride that won't be slowed by foul weather, deep snow, or gnarly terrain. Why you'll love it 1 - This is a fat bike made without compromise: it's the lightest, fastest model we make 2 - It's a four-season freedom machine that lets you ride outside all year long 3 - The 27.5x4.5 tires deliver more speed and traction than their 26-inch counterparts 4 - It's easy to set up tubeless - and when you do, you'll save weight and your ride will get even faster

Surly Big Fat Dummy
$2,950.00 - $3,025.00
The Big Fat Dummy is a long tail cargo bike that took a few too many doses of growth hormones. At first glance, you might say that Surly just put bigger tires on a Big Dummy. But if you said that, you'd actually be very wrong so just… don't. Think of Big Fat Dummy as more of a second or third cousin to Big Dummy rather than a brother. They share some of the same DNA and look sort of similar, but they're two very different bikes and really only interact when they both reach for the potato salad spoon at that family reunion that no one really wants to be at anyway. Now that that's out of the way, let's get down to the nitty gritty of what makes this hulking beast of a bike tick. Surly's goal with designing a cargo bike around fat tires was to create the most stable, stiff, and traction-laden ride possible while hauling a ton of stuff. Big Fat Dummy has a longer toptube and slacker headtube than its more svelt cousin giving it a nice, predictable, and stable ride. They also used thinner, lighter tubing to construct its cargo area so while it's an overall burlier bike, there's not much difference in weight. Big Fat Dummy accepts either 10mm or 12mm axles in the rear with a spacing of 190/197mm. That big ol' spacing equates to one thing: tire clearance for days. Big Fat Dummy maxes out at a massive 26 x 5.25" tire.* While that large of a tire provides the most traction and stability a bike can possibly offer, it's also a lot of rubber to push and might not be for everybody. Luckily, Big Fat Dummy is also a blast to ride with 3" tires too. It uses the same 100mm suspension-corrected fork as the Wednesday, meaning if you want to add a little squishy squishy to your ride, you can throw a Bluto on and let ‘er rip. If you intend to carry a passenger on your Big Fat Dummy, Surly requires use of their Dummy Rail Collars. These provide a secondary retention system for the rack, as well as stiffen the rack system. In addition, a stoker handlebar set up, found on tandem bicycles, is recommended as well. Make sure to check with seat post manufacturer for stoker handlebar compatibility. All Big Fat Dummy framesets and bikes ship with a Dummy deck, rails, bags, and the aforementioned Dummy Rail Collars so you can immediately start hauling cargo — human or otherwise. Big Fat Dummy is ready and willing to carry all sorts of crap — literally. It's already in use on an organic farm in Ecuador so it's likely that it's hauled some form of manure by now. *Using a 26 x 5.25" tire will cause some drivetrain limitations. 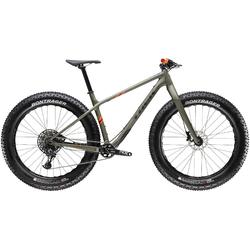 Trek Farley 9.6
$2,999.99
Farley 9.6 is a carbon fat bike built for speed. The lightweight OCLV Mountain Carbon frame, rigid carbon fork, and a 1x12 SRAM NX Eagle drivetrain make it great for mountain bikers who prioritize performance in a fat bike. If you're ready to go hard through every season and love fat biking in every form- racing, adventure, fun - Farley 9.6 is the high-performance ride for you. It's right for you if... You don't just want to ride trails through the winter - you want to ride fast. You already know you love every aspect of fat biking, and are looking for a faster ride with better performance to take on bigger adventures. The tech you get A lightweight OCLV Mountain Carbon frame with Stranglehold dropouts, a Bontrager Haru rigid carbon fork, a wide-range 1x12 SRAM NX Eagle drivetrain, and extra-wide SUNringle Mulefut wheels paired with 27.5x4.5 Bontrager Barbegazi TLR tires. The final word Speed in every season. Farley 9.6 is light, fast, and built to rip. It's the ideal winter shred sled for fat bike adventurers, racers looking to train outside year-round, and anyone who values the performance advantage of carbon. Why you'll love it 1 - The faster you ride a fat bike, the more fun it gets—and this bike is a lot of fun 2 - It's a four-season freedom machine that lets you ride outside all year long 3 - The 27.5x4.5 tires deliver more speed and traction than their 26-inch counterparts 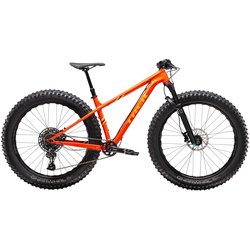 Trek Farley 7
$2,599.99
Farley 7 is the mountain biker's fat bike. It's built to feel like a traditional mountain bike with way more capability. The lightweight aluminum frame, SRAM 1x12 drivetrain, dropper post, and Manitou Mastodon fork make it the ideal ride for trail-shredders who want to get rad in every season. It's right for you if... You want your fat bike to feel like your traditional mountain bike. Or, you're riding a fat bike year-round and want to put your money into the parts that really matter, like a performance drivetrain and a quality suspension fork. The tech you get A lightweight Alpha Platinum Aluminum frame with Stranglehold dropouts, an 80mm Manitou Mastodon suspension fork with an air spring and lockout feature, a wide-range SRAM NX/SX 1x12 drivetrain, SRAM Level T brakes, a dropper post, and SUNringlé Mulefut wheels paired with a 108T Rapid Drive hub for instant engagement, and extra-grippy 27.5x4.5" Bontrager Gnarwhal TLR tires. The final word This is a fat bike that rides with the handling characteristics of a traditional trail bike—only it's a lot more versatile. You're getting a great frame and a performance parts group, but you're really paying for the incredible capability of the Manitou Mastodon fork. Why you'll love it - If you were under the impression that fat bikes were sluggish, this bike will change your mind - The combination of the Manitou Mastodon fork and 4.5" tires make it easy to charge through snowy trails and rock gardens alike - It's a four-season freedom machine that lets you ride outside all year long - The 27.5x4.5" tires deliver more speed and traction than their 26" counterparts 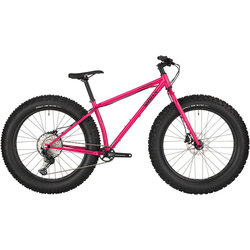 Surly Ice Cream Truck
$2,000.00
Ice Cream Truck is the bike we reach for when we don’t really know what the trail has in store. From log and root-covered ribbons of twisty singletrack to miles of powdery snow or sandy beaches, Ice Cream Truck can handle it all. Hell, you could probably even hop over a grizzly if the situation arises. Probably. While we could certainly throw out terms like "confidence-inspiring" and "traction-laden" to describe Ice Cream Truck, those phrases are mostly garbage, so we’re not going to do that. We’re not here to inspire you, and we didn’t laden it with anything. What we did do was design a monolith of a trail bike that doesn’t care what’s in front of it. - Long toptube, short seatstays, and a 68-degree headtube angle makes it tight and maneuverable on fast, technical terrain - Modern trail bike standards like stealth dropper post routing, 44mm headtube, and thru-axles - Clearance for a full 26 x 5 tire on 100mm rims 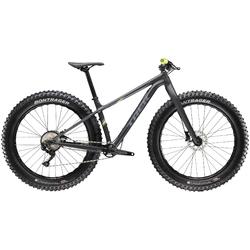 Trek Farley 5
$1,779.99
Farley 5 is Trek's best value fat bike and the perfect gateway to all-season freedom. It rolls over snow, sand, roots, and rocks with the stability and traction of a monster truck on beefy 27.5x4.50-inch tires. A 1x Shimano drivetrain, lightweight aluminum frame, and carbon fork make it a great choice for anyone who wants to ride a mountain bike year-round, no matter the weather. It's right for you if... You're likely to ride year-round, even when it's snowing, and want a fat tire bike that gives you extraordinary capability and traction at a great value. The tech you get A lightweight Alpha Platinum Aluminum frame with Stranglehold dropouts, a Bontrager Haru carbon fork, a wide-range Shimano Deore 1x10 drivetrain, and Tubeless Ready SUNringle Mulefut wheels paired with extra-grippy 27.5x4.5 Bontrager Gnarwhal TLR tires. The final word Fat bikes are ridiculously fun. They're grippy and stable, but the best thing about them is that they get you outside in more seasons. If you're looking for a fun alternative to riding the roads or trainer through the winter, you won't find a better value than Farley 5. Why you'll love it 1 - Farley 5 is the perfect bike for breaking into the winter sports scene without breaking the bank 2 - It's an introductory model, but fully capable of taking on daily winter rides, fat bike races, and even summer trails 3 - It's a four-season freedom machine that lets you ride outside all year long 4 - The 27.5x4.5 tires deliver more speed and traction than their 26-inch counterparts
Page 1 of 1