Shop Note: We're always interested in what it takes to compete in the Tour de France. So it's a great pleasure to provide expert wattage analysis from coaches who review the data of the Tour's best riders. This article deals with the 9th stage of the Tour de France, a truly brutal stage that climbed 5 categorized passes in the Alps ending with the feared Col de la Madeleine. Called, "the toughest climb in the world" by Tour legend, Tony Rominger, the Madeleine served up over 15 miles of climbing at an average gradient of 6.3% with pitches of 11%. Keep reading to learn just how hard it was.

In another exciting day at the 2010 Tour de France, Team Saxo Bank’s Andy Schleck rode his way into the Yellow Jersey in a dominating effort that included amazing support from teammates like Chris Anker Sorensen, who rode at an average of over 300 watts for 6 hours. With numbers like that for Chris, just imagine what Andy did!

Saxo Bank’s plan for the day went perfectly. “The plan was to put on huge pressure if Andy [Schleck] was feeling alright and thankfully, he was flying,” said team owner Bjarne Riis. “Jens [Voigt], Chris [Anker Sorensen] and Jakob [Fuglsang] put in a world-class effort and they actually started the massacre on our opponents.”

Chris was very attentive up the Columbiere (the first Cat 1 climb of the day) and rode near the front, riding right at his functional threshold power (390-400 watts) before the little downhill near the middle of the climb. Afterward, he rode below his threshold around 350 watts to finish the Columbiere. Luckily for him the Aravis climb was much easier as was the Col de Saisies.

As the peloton started up the biggest climb of the day, the hors categorie Col de la Madeline, Team Saxo Bank took control for their leader as described on VeloNews, “Chris Anker Sorensen came to the front and Saxo Bank began drilling it for Schleck, shedding first the classics riders and sprinters, like Fabian Cancellara (Saxo) and Green Jersey Thor Hushovd (Cervélo TestTeam), and then stage racers like Amgen Tour of California champion Mick Rogers (HTC-Columbia) and Critérium du Dauphiné winner Janez Brajkovic (Team RadioShack)… Evans had one teammate setting tempo in the Yellow Jersey group. Then Saxo Bank’s Sorensen came to the front once more and put the pressure on 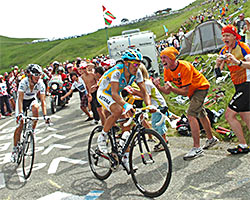 “Chris went right to the front at the base of the climb and began setting the highest pace he could set for the climb in order to burn off as many riders as possible, thus launching Andy Schleck in a breakaway,” explains Hunter Allen in his analysis of the day’s data. “Chris’ effort was highly effective as when he did pull over from the pacemaking at the front, there were hardly 15 riders left in the front group. In that 10 minutes that he was on the front, he averaged 410 watts, or 6.4 watts per kilogram! This pace was clearly above his Functional Threshold Power, as he could only maintain it for 10 minutes and when he pulled over, he rode at 358 watts for the next ten minutes in order to recover. For Chris, the entire Madeleine climb was 1:16 minutes long at an average normalized power of 334 watts.”

“All in all, an outstanding ride by Chris Anker. We have seen this from him in last year’s Tour as well, when he did roughly the same effort on Stage 20, leading out the Schlecks at the base of Mt. Ventoux,” continues Hunter. “Chris has the ability to climb with the worlds best for sure and today was one of them. Had he been on his own, I

would venture to guess that he could have climbed with Levi Leipheimer in that group and finished in the top 15. Team Saxo bank has one of the strongest well-rounded teams in the Tour this year and Chris Anker is without a doubt one of the most important riders to help Andy in the mountains.”

We hope you've enjoyed reading about the superhuman efforts of the riders of the Tour de France. Come in and talk Tour with us any time you like.

Hunter Allen is a certified USA Cycling Level 1 Cycling Coach and a former professional cyclist. With over 17 years of racing experience and 10 years of coaching experience, Hunter is widely known as one of the top experts in the world in coaching athletes using power meters, and offers training plans for athletes of all levels at Training Peaks.